The Jura: it's France, Jim, but not as we know it

The Jura: it's France Jim, but not as we know it

Its closest wine-making neighbour is Burgundy, but the Jura is a world away in terms of awareness and recognition of its sometimes shockingly idiosyncratic wines.

I've written before about this intriguing region, over on the Liquid Assets blog. If you'd like to know more about Vin Jaune, its affinity with Comté cheese and the connection with Laughing Cow/La Vache Qui Rit, then you can have a read here.

What's with the Jura obsession that I am writing about it again so soon? Fount of knowledge on many things vinous, but especially the Jura and Savoie, Wink Lorch set up a tasting of the region's wines, made by five of its leading organic vignerons. The winemakers were in town to participate in either the RAW or Real Wine Fair, held in London last month.

Who says wine isn't political? The natural wine “movement” in the UK is barely a year old and already it has undergone its first great schism. This year producers had to choose to be part of either Isabelle Legeron's RAW or the Caves de Pyrène-backed Real Wine Fair. It's the Popular People's Front of Judea versus the People's Popular Judean Front all over again...

But back to the Jura. Because of the unique nature of the wines found in this tiny and isolated region, I've explained a little about the styles of wine that we tasted, which range from broadly mainstream to highly idiosyncratic, and chosen my favourites in those styles.

At the most mainstream end of the spectrum were the two Crémants du Jura that we tasted. Both 100% Chardonnay and made by what the Champenois decree we must call the traditional method, they were recognizably classically styled, well-made sparkling wines:

Crémant du Jura Brut, Domaine de la Pinte
With 36 months on the lees, this is, not surprisingly, reminiscent of an aged Blanc de Blancs Champagne.

The real fascination came, however, when we dived into the Jura's native grape varieties. Poulsard (aka Ploussard) wines are so light in colour as to pass for rosé, though the flavours are very different: I found cider, clove and apple skin flavours and relatively little in the way of red fruit. 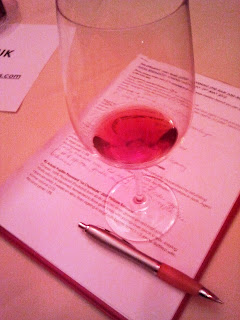 Trousseau is the Jura's other native variety and it shares characteristics with Pinot Noir: lightish colour and body, soft tannins but plenty of acidity and red fruit. The natural winemaking styles of the vignerons tend to make for less primary fruit than Pinot-philes might want, but in its place are layers of aroma, flavour and texture.

My favourite red of the evening, though, was a Pinot Noir dominated blend:

Arbois A la Capitaine 2009
62% Pinot Noir, 35% Poulsard, 3% Trousseau
There is some Pinot-like red fruit perfume here, allied to something more vegetal. And in this land of light bodied wines, this is relatively weighty with plenty of user-friendly, juicy fruit.

White wines come in two styles in the Jura: those made by standard vinification, ie where barrels are kept topped up to exclude exposure to oxygen; and its opposite, where an air space is allowed to develop and an oxidative style is produced.

The most immediately appealing and recognizable by White Burgundy lovers was this 100% Chardonnay.

Côtes du Jura Chardonnay á la Percenette 2010, Domaine Pignier
The nose has a hint of honey and ripe butteriness, but the palate is not at all flabby, with grip and texture allied to a crisp minerality, along with the extra dimensions of phenolic flavours.

Savagnin may not be a household name of a grape – though watch out, as Australian growers who thought they were planting modish Albariño a few years back had in fact planted this Jurassien oddity instead. It is best known for producing Vin Jaune, but can also make classic barrel-aged styles too. If you like a bit of struck match in your white Burgundy, this could be for you.

Arbois Cuvée d'Automne, Savagnin/Chardonnay sous voile, Domaine de la Pinte
80% Savagnin, 20% Chardonnay, this is a kind of Vin Jaune Lite as some of the Savagnin came from barrels destined to make Vin Jaune. The Chardonnay is a blend of several different vintages. Analagous, perhaps, to Ripasso versus Amarone. It definitely has many of the nutty, mushroomy flavours of Vin Jaune, but with the more upfront, lively fruit of a conventionally made wine.

Vin Jaune – the real deal – is a wine that takes no prisoners. For more on the winemaking process see here, but, in brief, wines made from 100% Savagnin spend years in barrel under a layer of flor, making for wines with no primary fruit, but plenty of fino-like, nutty, even curry spice flavours and immense presence and length. They are unique and, once tasted, never forgotten.

Arbois Vin Jaune 2004, Domaine de la Pinte
Smelling it you would swear blind that it was an aged fino in the glass. The palate is nutty, cheesy, super dry and the flavours linger.

Any French wine region worth its salt has to produce a dessert wine. In the Jura it takes the form of a “vin de paille” or straw wine, where early picked grapes are stored over winter, whereby they lose most of their moisture content, but retain their naturally high acidity. The grapes are pressed the following Spring, producing a viscous, sweet must which takes months to ferment into rare and expensive wines. 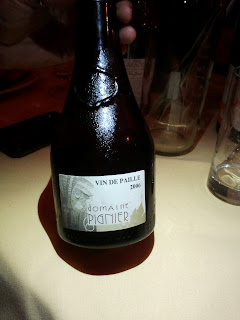 Côtes du Jura Vin de Paille 2006, Domaine Pignier
40% Savagnin, 30% Chardonnay, 30% Poulsard
Sweet and honied fruit, combined with aromas of straw (not just auto-suggestion I like to think) and a whisp of tannin from the red grape Poulsard made this an excellent end of meal sweet treat and palate cleanser in one.

Some of Jura's wines stand resolutely outside the mainstream, and their odd combinations of flavours and aromas can jar. But if you open your mind and learn to re-tune your internal wine settings, there is much fascination and pleasure to be found there.  For more background on this Jura tasting and links to the winemakers, head over to Wink Lorch's Jura wine blog.
Posted by Heather Dougherty at 17:03

In addition to this blog, I am the wine columnist for the Surrey Advertiser. Those columns are brought together in the Liquid Assets blog.

As Red White & Rosé, I also work on a wide range of wine events - from tutored tastings to large scale corporate events - which we guarantee to be fun and informative. Have a look at the Red White & Rosé website to check us out. 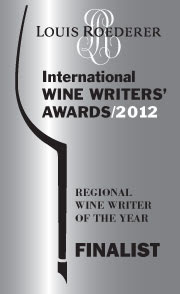 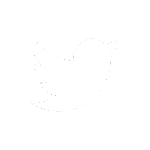 If you're interested in a wine event to entertain, educate and enlighten, please visit Red White & Rosé for details of wine tastings for corporate entertainment, wine and dine evenings and more.